The vast and majestic square of Naqsh-e-Jahan in Isfahan, dating back to the Safavid Dynasty (1491-1722), is embelished with a magnificent ensemble of buildings: the Mosque of Sheikh Lotfollah, the Imam Mosque (formerly: The Royal Mosque), and the Palace of Ali Qapu. The great square was, under the Safavid monarchs,the scene of maneuvers, processions and games especially polo. It is surrounded by twolevel arcades.

The Mosque of Sheikh Lotfollah, the Imam Mosque, and the Palace of Ali Qapu stand gloriously on the east, south, and west sides respectively. At the north end of the square is the royal carvansarai and the bazaar which was described in the last issue. With Shah Abbas I (1589-1627) the great period of Safavid architecture started. Under his auspices, Ali Qapu, originally a Seljuq-Timurid pavilion, was considerly enlarged and perfected and became the seat of government, chancellery of State Administration, and a place for ceremonial events.

Shah Abbas here for the first time celebrated the Norouz (New Year's Day) of 1006 AH/1597 A.D. A large and massive rectangular structure, Ali Qapu is 48 meters high and has six floors, fronted with a wide terrace whose ceiling is inlaid and supported by wooden clumns. Ali Qapu is rich in naturalistic wall paintings by Reza Abbasi, the court painter of Shah Abbas I, and his pupils. 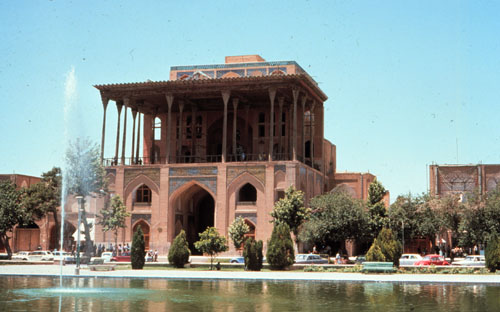 There are floral, animal, and bird motifs. The highly ornamented doors and windows of the palace have almost all been pillaged at times of social anarchy. Only one window on the third floor has escaped the ravages of time. Ali Qapu was repaired and restored substantially during the reign of Shah Sultan Hossein, the last Safavid ruler, but fell into a dreadful state of dilapidation again during the short reign of invading Afghans. Under the Qajar Nassereddin Shah's reign (1848-96), the Safavid cornices and the floral tiles above the portal were replaced by tiles bearing inscriptions.

Shah Abbas II was enthusiastic about the embelishment and perfection of Ali Qapu. His chief contribution was a magnificent hall that constitutes the third floor. The 18 columns of the hall are covered with mirrors and its ceiling is decorated with great paintings. The chancellery was stationed on the first floor. On the sixth, the royal reception and banquets were held.

The largest rooms are found in this floor. The stucco decoration of the banquet hall abounds in the motif of various vessels and cups. The sixth floor was popularly called the musical room. Here various ensembles performed music and sang songs. From the upper galleries, the Safavid ruler watched polos, maneuvers and horse racing that took place on the opposite square of Naqsh-e-Jahan.